in 2008, still a student at UMD with lots of time on my hand, I went running a lot. One of my companions was my running watch, tracking and recording GPS data of my runs. As data and measurement enthusiast, I quickly became interested in the various type of analysis the running watch website provides. Besides timing, pace, and elevation information the run data also provided, when used as set of multiple runs, insight on my favorite running routes in College Park.

However, one important feature the web system is still missing is to give better advice on where the most popular running routes are. Why would someone be interested in this question? There are a couple of scenarios where I think this information could help runners to find better routes:

1.     You are running in a new environment, i.e. at a new location during your vacation, and you want to know where people run here.

2.     You are bored of always running the same tracks in your neighborhood and you want to explore new route near you?

3.     You want to find a "good” running route from A to B which is in most cases not the shortest but the track with least amount of cars and traffic lights (i.e. through the woods) and this information is not provided by Google maps.

Motivated by this question, I first build a system that was able to overlay my own runs as seen in Figure 1 below. 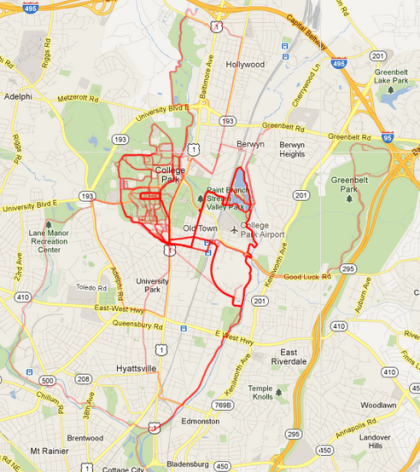 After building this first prototype, I made an attempt to get a bigger picture of runs in the Washington D.C. region by analyzing a larger set of runs. The data forced me to be a bit more creative about merging the runs into one map. After using a combination of sampling and discretization approach, which reduces resolution but still preserved basic route information, I created a global running “heat” map for Washington DC. In the map, the thickness and color of the lines indicates the level of popularity of a route. I decided to use three levels:

BOLD RED: most popular sections are sections that were run by at least 20 different runners .

ORANGE: popular sections are sections that were run by at least 2 different runners ,at least 4 times.

THIN YELLOW: runnable sections that were run by at least 1 runner, at least 2 times. 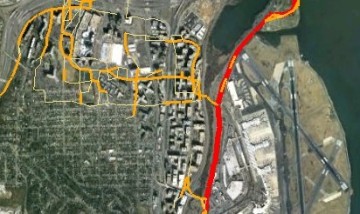 All sections that have were run only one time by one runner are not shown, since the level of confidence that of this beeing a good running route is rahter low (i.e. one might run a route and find it terrible and not run it again).

This file can be viewed in Google Earth (download available at bottom of the page). A couple of screen shots of Google Earth are below showing some interesting new insights. 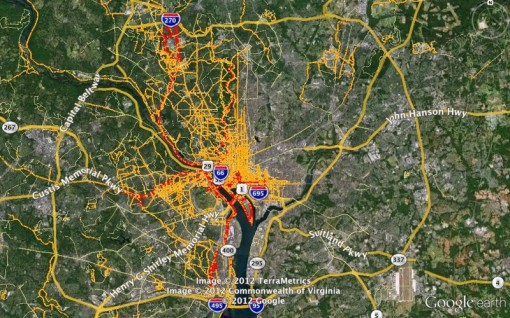 Washington DC Running Map most runners run downtown, and in the western parts of the city 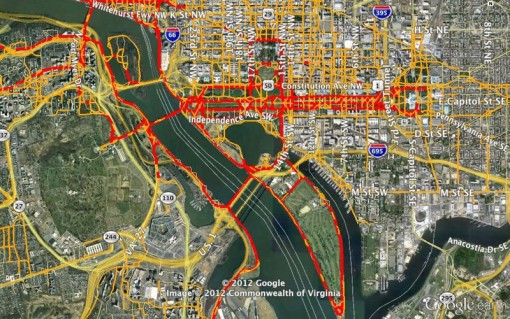 Downtown DC: not surprisingly the National Mall is a popular (red) running route, as well as the banks of the Potomac. The larger empty area on the left is the Arlington Cemetery. 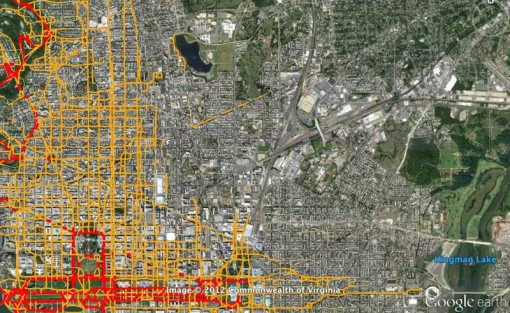 Interesting is the clear cut beween east and west. One can think of multiple theories why more running data is captured on the western parts of DC.

Some words on the threads to validity of this first map:

1.     All these runs were captured during Fall/Winter and a running map for Summer months might differ. However, typical weather in Washington D.C. during November and December is still very pleasant for running.

2.     The samples are taken from runners wearing a GPS watch. This probably excludes less “serious” runners or runners that simply do not like wearing a GPS watch. GPS watches were relatively expensive at this time﻿, ranging from $150 to $300, which might exclude for example younger persons that cannot afford such a gadget.

3.     Running events, such as marathons might affect this map. The resulting data might be a red line with many runners sharing the same track, but the roads they ran are surely not good running routes on other days except the day of the event. A future solution could be to filter these events that should be relatively easy to extract by a heuristic (e.g. a section run by 20 or more runners in the same day, but significantly less the other days).

Recommend this page on: